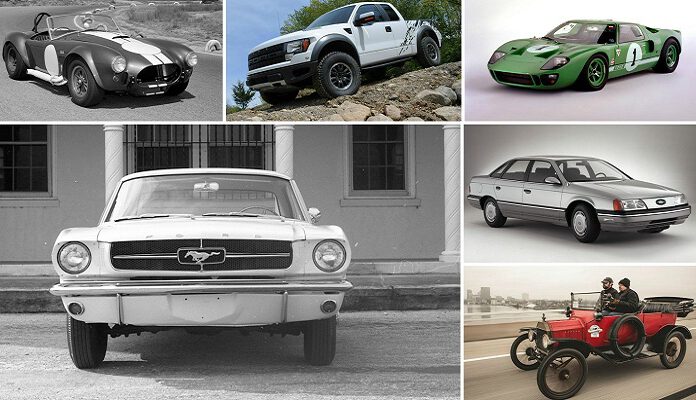 We have compiled for you the interest parts and car models from the history of the Ford brand, which has many models such as Mustang, Fiesta, and Focus.

The story of Ford Motor Company, or Ford, which we can say that it is quite successful, produces a vehicle for almost every car category begins 100 years ago. Founded in 1903 in the state of Michigan, USA, Ford Motor Company takes its name from its founder, Henry Ford.

Launching its first vehicle on the market the year it was founded, Henry Ford realizes that he must wait 5 years for the first breakthrough. Wanting to find a way that vehicles can produce quickly, Henry Ford is exploring the “Fordist” production method, which will be remembered many years later by his own name.

With a system that basically has a production line, the iron stack entering from one end of the factory comes out as a car from the other end. With this method, which provides production 5 times faster than normal, Ford manages to be among the biggest manufacturers of the USA.

When it comes to “The first mass-produced car brand”, undoubtedly, Ford and the legendary car Model T come to mind. Ford Model T, which is among the most iconic vehicles produced by Ford Motor Company and the world to date, is a very interesting vehicle with its history and durability.

Produced from 1908 to 1927, the car maintains the title of “3rd best selling car ever” as of 2018. Produced with different options such as 2, 3 and 4 doors, the well-preserved ones can still work today. Despite the front engine, the Ford Model T has a rear-wheel drive and has a rather large engine of 2.9 liters.

However, although the engine sounds quite large, it can only produce 20 horsepower. However, thanks to its highly durable and long-lasting engine, Ford made up almost half of the cars sold in the USA in the 1920s.

Taking its name from the Taunus Mountains in Germany, the vehicle was produced from 1939 to 1994 and is still among the longest produced car series. The vehicle Ford designed for Europe creates the impression of North America only in terms of its dimensions.

Even though it looks like an old car when viewed from today, Taunus is among the legendary cars that managed to drag hundreds of thousands of people with its technology, comfort and powerful engines beyond the period it was produced. The car produced with different engine options such as 1.6 and 2.0; It has many versions such as G, M and TC.

Mustang, which Ford produced as a sports car and has its own logo, draws the image of a pop star. Mustang, which started to be produced in the 1960s, has been meeting with its 6th generation since 2015. The car, which is among the models that managed to get ahead of the brands, has a very interesting story.

The Ford brand considers the name for a powerful sports car, and as a result of a long struggle there are dozens of names. Among the names, a decision is made under the name of “Mustang” used for wild horses wandering in the countryside of the USA. The automobile manages to “sell off” when it first came out.

Mustang, which has been used in thousands of movies since 1964, is among the stars of the brand. After the 5th generation of the vehicle, which has been offered with many engine and color options since its launch, users have not seen new series cars for 10 years. With the 6th generation that came out in 2015, it managed to conquer the hearts again.

Offered in 2015 and Ford Mustang MK. The last member of the series, which is called 6, impresses with its details that make the driver feel special. The vehicle, which made minor changes with the makeup in 2018, has hard and sharp lines. The design, in which the iconic appearance is preserved, offers today’s technology with a 12-inch digital display when switching to the cabin.

Targeting the youth as in the 1960s, Ford tries to attract the users with small details such as the Mustang logo and forged aluminum wheels that are reflected on the ground with the help of the light when the vehicle’s door is opened. Ford Mustang 2018 offers a choice of 2.3-liter EcoBoost engines that can produce 310 horsepower.

Ford is one of the brands that early recognized the interest in SUV and crossover vehicles in recent years. With the Kuga model that it started to produce in 2008, it manages to enter the bestseller lists. The model, which hosts many security technologies as well as comfort, is very popular with its double-line grille. The vehicle, which can be parked with peace of mind at any point with its automatic parking system, also includes a special safety technology called active city security system that can apply sudden brakes instead of the driver when it is below 50 km / h. Ford Kuga is available with 1.5 and 2.0 liter TDCi diesel engines, in addition to the 1.5 liter EcoBoost gasoline engine.

Designed in such a way that families of 5 people can easily fit and benefit from low fuel consumption in the city, Ford Galaxy has an important place in the history of the brand in terms of the value it gives to families. The model, which was launched for the first time in 1995, manages to be a functional and versatile tool designed to meet everything families may need in big cities.

As with Kuga, the vehicle, where EcoBoost and TDCi engines are preferred, offers its users good performance and a perfect experience. The vehicle, which has a very large interior, offers an impressive head and knee distance even with 5 adult passengers.

Ford has been pursuing a strategy that has been investing in various countries or directly buying car manufacturers since its inception. Dozens of companies engaged in production in different countries, including Turkey, currently only holds the Lincoln brand luxury vehicles to respond to the demand in the US.

Ford also had brands such as Volvo, Land Rover and Jaguar in the past; but transferred some to the Indian Tata Group and the other to the Chinese Geely Group. Brands such as Mercury, Edsel, and Monarch in Ford were terminated.