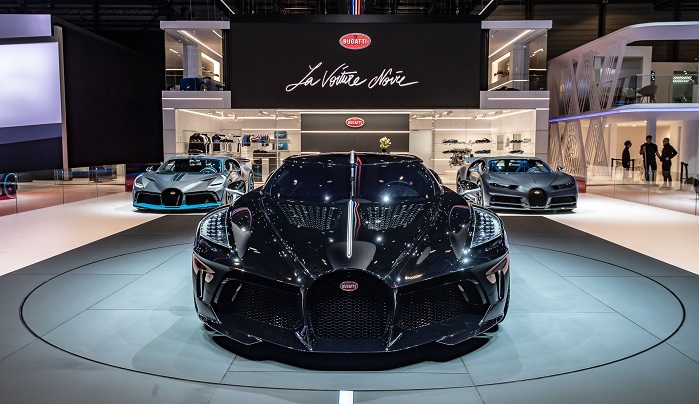 Bugatti La Voiture Noire, which is produced only one in the world was sold for an incredible price.

Referring to the Type 57 SC Atlantic lost by Jean Bugatti, this private grand tourer goes down in history as the world’s most expensive “Bugatti new model“, not just from the company Molsheim. Bugatti la Voiture Noire Price list of 11 million Euros is proof of this claim. Speaking at the live broadcast in Geneva, Stephan Winkelmann also stated that the New Bugatti was sold for 16.5 million Euros that is about 19 million dollars.

The model, described by Bugatti CEO Stephan Winkelmann as “the summit of GT cars”, is inspired by the iconic Type 57 SC Atlantic model. Bugatti La Voiture Noire, a version of Bugatti, a car of the era, Type 57SC Atlantic, adapted to the present day, has a hideous design with its jet black body color and design.

In fact, we are not very foreign to the car; Under the impressive body of Bugatti la Voiture Noire lies a Chiron. The body of Chiron has been completely redesigned. The extended nose, the distinctive C-shaped character line of the brand, the bumpers combined with the body, and the windshield design that reminds the visor of a helmet are the details that make up the striking design of La Voiture Noire.

Bugatti chief designer Etienne Salomé describes the new La Voiture Noire: “The carbon fiber body of each hand-made car comes in a deep and bright black color. We worked on this design for a very long time until there was nothing we could improve. We think this coupe has a perfect form and a perfect color. ”

Bugatti La Voiture Noire has a hand-made custom carbon fiber body. At the heart of the car developed from Chiron, there are 4 turbocharged 8.0-liter W16 engines in Chiron, Chiron Sport and Divo that can produce 1500 horsepower and 1600 Nm torque.

The most expensive cars in the world